First of all, while I still have your attention, the music you’re about to read about can be yours for the low-low price of zero dollars. You can listen to and download all twelve tracks of Staying In right here:

This is my first time “selling” (it is $0) any music I’ve written, and, now that I think about it, it’s probably not a good “debut album.” I’d like to be very up-front about the fact that all this music is performed by computers, that it is highly conceptual, that it is sometimes atonal, and that it probably requires multiple listenings to be appreciated.

So, what is Staying In? The way I describe this project varies depending on who I’m describing it to. If I was trying to impress someone in academia, I’d say it’s an experimental foray into aleatoric and atonal music, inspired by 20th century techniques. If I was trying to impress a “starving artist”/punk rock-type musician, I’d say it’s a trippy, prog-rockish soundscape/concept album. Of course, the truth is it’s both.

There is creativity not just in the music but also in the underlying concepts that created the music. Each piece of this work has a predetermined element (be that melodic, rhythmic, motivic, or something else) that was decided on by something or some activity surrounding the average home. A boiling pot of pasta created the bass line for one piece; a game of Scrabble created the vibraphone melody to another piece. That being said, there are two different ways to think about this music. The first way is to think of it as a story describing a pleasant evening at home (hence Staying In), as explained in one version of the liner notes: 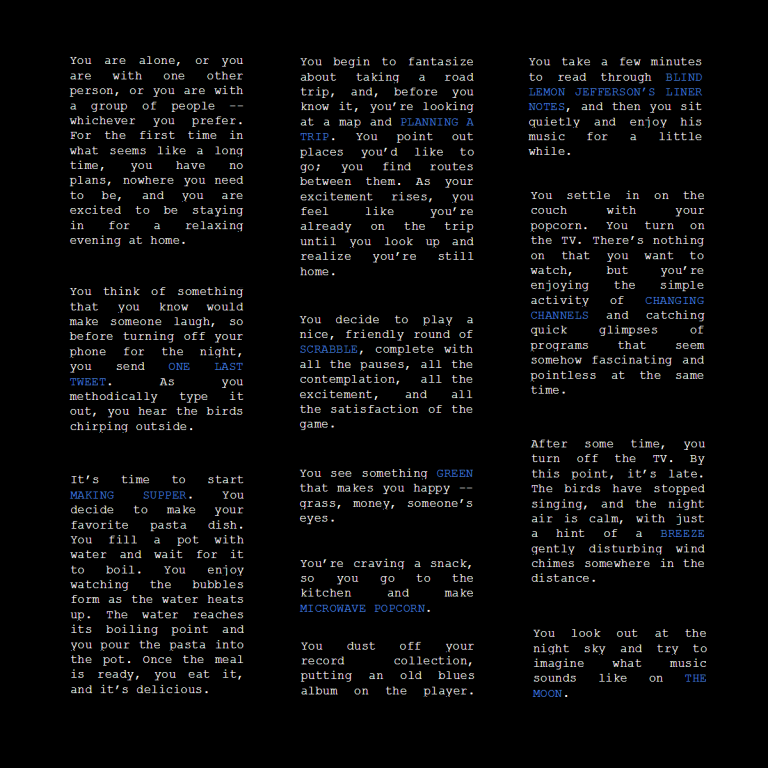 The second way to think of this music is as a series of conceptual experiments, as explained in this version of the liner notes:

(Of course, the unwritten third way of thinking of this music is to think of it as music.)

The instrumentation of every track is piano, electric guitar, bass guitar, and vibraphone, or some combination of those instruments. I’ve spent most of 2015 on this project. Some tracks were composed and created in as little as one day, while I spent weeks on other tracks. I’m proud of all of this music, but if you asked what my favorites are, I’d say: the “Introduction,” “Scrabble,” and “Microwave Popcorn.”

It has occurred to me that a lot of this music would be extremely difficult to perform. The music in these “recordings” was created through various computer-based methods, in all cases ensuring that every note is exactly where I want it. Although I completely believe it’s possible for these pieces to be performed live, these are the definitive versions. I think of these like a painting; different artists can re-create their own versions of a painting, and people can create “living” renditions of a painting. Hypothetically, the re-makes could even be better than the original. But none of the re-makes will ever be the original.

So, what are my expectations for this? Well, to be honest, they are very low. I’m young. I’m trying to be reasonable. After spending several months on this music, it’d be easy for me to get defensive and grandiose, claiming I’ve created a Sgt. Pepper’s for a new generation. But I’m sure I’ll make better music and I’ll make worse music throughout the rest of my life.  I grew up in the YouTube Era, so I’ve seen some pretty strange things go viral, but a collection of conceptual aleatoric art music would be among the strangest. My hope is that a few people would stumble across it and enjoy it or be inspired by it. At the very least, I hope I can listen to this in 10, 25, 50 years, and still be as proud of it as I am now.

Thank you, and enjoy!